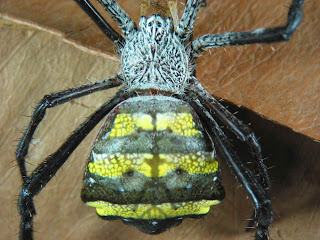 Argiope anasuja is a species of Orb spider found in Asia ranging from Pakistan to the Maldives. Like other species of the same genus, it builds a web with a zig-zag stabilimentum. The mature female of A. anasuja always rests at the centre of the orb with her head facing downwards. The orb has an opening at the centre and when disturbed she goes through the hole and exits on the other side of the plane of the web.
Acusilas 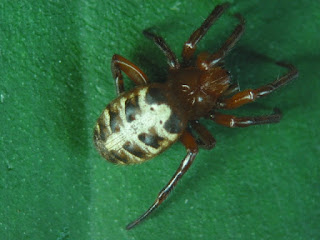 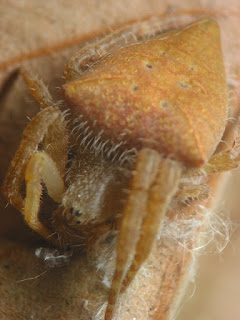 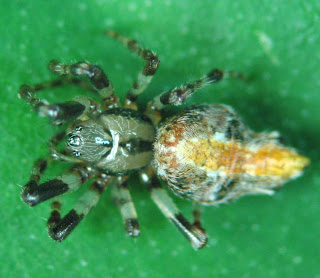 Spiders of this species spin vertical orb webs in the vegetation, usually found at height of about one meter above the ground. Across the diameter of the web, a stabilimentum is present formed of pieces of debris and egg sacs. The spider sits at the centre of the orb among debris, the cryptic colouration and its habit of hiding among the debris in the stabilmentum makes the species inconspicuous. The genus Cyclosa occurs world wide, ranging from the temperate regions to the tropics. 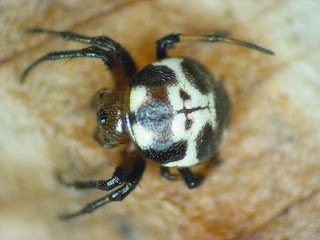 Cyrtarachne is a genus of nocturnal orb weaving spiders common in South Asia, distinguished from other araneids by its shell like abdomen with numerous sigilla on the dorsum. They build large webs with few radii and with visible viscid droplets. 55 species are recorded from the world so far (Platnick, 2010). C. keralensis can be distinguished by blackish abdomen decorated with white patches and median ‘Y’ shaped white patch, with a n.arrow mid dorsal black line. The median white patch has three lateral extensions, anterior and median extensions are broader and posterior is shorter and narrower. The carapace greenish or golden yellowish. Legs appear similar to carapace in colour with joints darker or blackish in colour. Males are similar to females in colour and pattern. 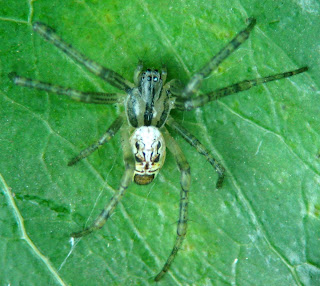 The spiders of this genus Cyrtophora, although technically orb-web spiders, do not build orb webs. Their tent-like, highly complex non-sticky web is sometimes considered a precursor of the simplified orb-web. These webs are aligned horizontally, with a network of supporting threads above them. These spiders often live in colonies. Females have a body length of mostly about 10 mm. A tent-web spider suspended beneath its web Some members (e.g. Cyrtophora cicatrosa) exhibit the ability to change colour rapidly. 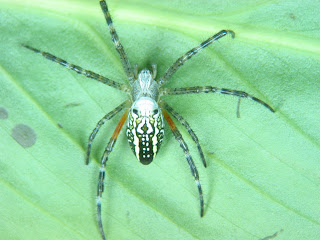 The colourful abdominal markings of this spider make it reasonably easy to recognize although immature specimens do look rather different from adults. The mature male is very differant from the female in appearance. Cyrtophora moluccensis does not build an orb web. Its tent-like, highly complex non-sticky web is sometimes considered a precursor of the simplified orb-web. It has a distinct dome with a central peak where the spiders hide and threads above and and below the dome. The spiders often live in loose colonies where the webs may not be joined, but are often built very close each other. The spiders mostly hang in the bottom of the web, upside down. Egg sacs are strung above the dome. The male is much smaller than the female. ♀ 24mm ♂ 8mm. 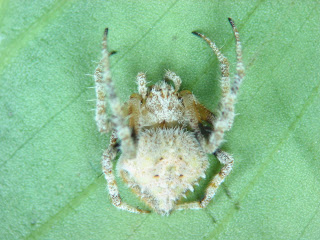 This is one of the commonest spiders in Kerala and most people might have seen their webs in the backyards. The spider has a flattish abdomen covered with off white hairs. The posterior end of abdomen has tail like extension. It spins vertical orb webs and is usually found on plants, shrubs even on those in gardens. The under surface of abdomen has a black median patch bordered by white lateral patches. Species exhibit much variation in colour, some are white and some brownish. In its typical resting posture legs are pulled in around the abdomen and carapace thus forming a circular outline. Often near the spider there are some flecks of white silks. Egg-sacs are laid on the underside of a leaf and covered in a fluffy mass of yellowish brown silk. 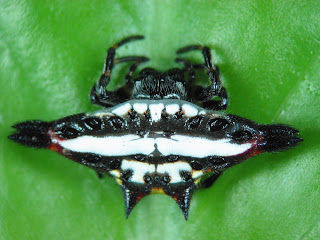 Spiny orb-weavers is a common name for Gasteracantha, a genus of spiders. They are also commonly called Spiny-backed orb-weavers, due to the prominent spines on their abdomen. These spiders can reach sizes of up to 30mm in diameter (measured from spike to spike). Although their shell is shaped like a crab shell with spikes, it is not to be confused with a crab spider. Orb-weavers' bites are generally harmless to humans. 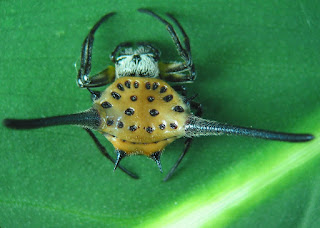 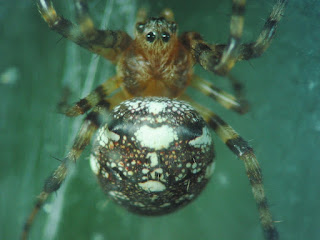 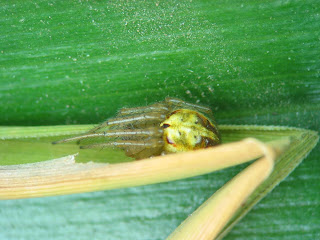 It is commonly found in the paddy fields of India and china where it is an important predator of insects. In China it is known as new oval garden spider. 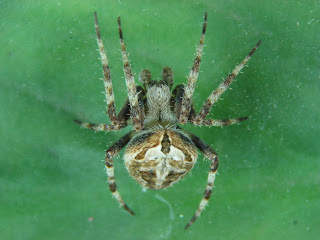 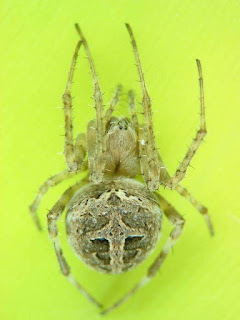 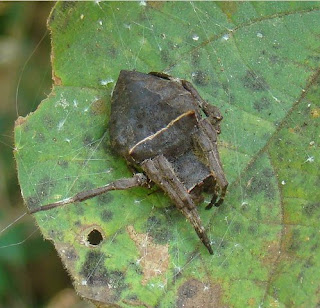 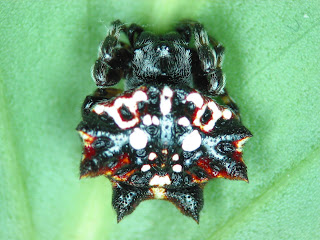 
Thelacantha is a spider genus of the Araneidae family with only one described species, T. brevispina. The species is closely related to Gasteracantha. The species is found Madagascar, in southern Asia from India to Philippines, Japan and Australia.